In my journey to master the most obscure and secrets arts of computer systems, I started by mastering the basics. One thing I have never worried to learn properly was linking, since most of the projects I worked on had everything set, Makefile was already written. But the time to grow up becomes. Let’s start then.a I took the examples from Computer Systems: A Programmer’s Perspective

The ELF file contains a header that give us information that will help the linker to parse and interpret the object file. Here are some information of an ELF header, I used the readelf command.

The basic structure of an ELF file is as follow: 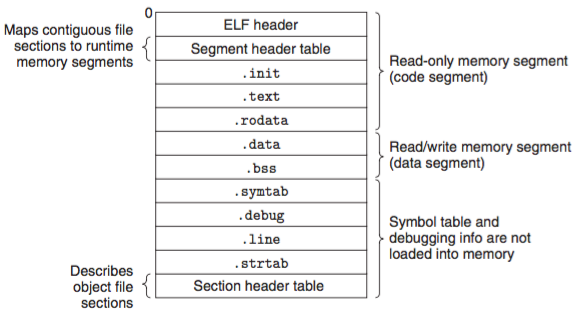 Image obtained from this site

I compiled it with gcc -c since I just wanted to focus on the code itself. Let’s check the .rodata and see what it contains, I used objdump -D to get the assembly code of that section.

In case it is no obvious, I added the letters using the ASCII code. As I mentioned before .rodata only contains read only data.

Now let’s focus on the .symtab. To do so, let’s compile the code without the -c option. I used objdump -x to visualize the .symtab. Some entries of the .symtab are shown below.

Description of the columns from left to right.

So these are the basics of the ELF files. If want to read more just google it or read the man pages of the commands I used, I am not kidding. You can also read the chapter 7 of book it mentioned above.

The compiler associates each symbol reference with one symbol definition in the ELF file. The compiler allows one only ones definition of each local symbol per module. It also ensures that static local variables have unique names. In case of global symbols such as variables or functions the compiler has to decide which reference to use, and thus symbol resolution maybe be tricky.

In symbol1.c, the symbol x has been defined as int and it has a reference inside the printf.

But what would happen if we defined the symbol x somewhere else:

I compiled it as follow gcc -o test symbol3.c symbol2.c, and this is the result.

Thus, the assignment of x as double overwrites the memory location of int x and int y. And that’s a nasty bug.

Let’s defined a function p() and a char main in symbol4.c.

And call p() in another file symbol5.c

The result of compiling as follow gcc -o test symbol5.c symbol4.c is:

Why did p() print something even though main has not been initialized?

With the help of objdump -x test let’s see if main is defined in first place:

It is defined as function, this is because char main is a weak symbol (it has been declared but not defined) whereas int main() {...} is a strong symbol. Thus, function main overrides char main.

Now it’s time to explain the output. I use objdump -D to see the opcode of main.